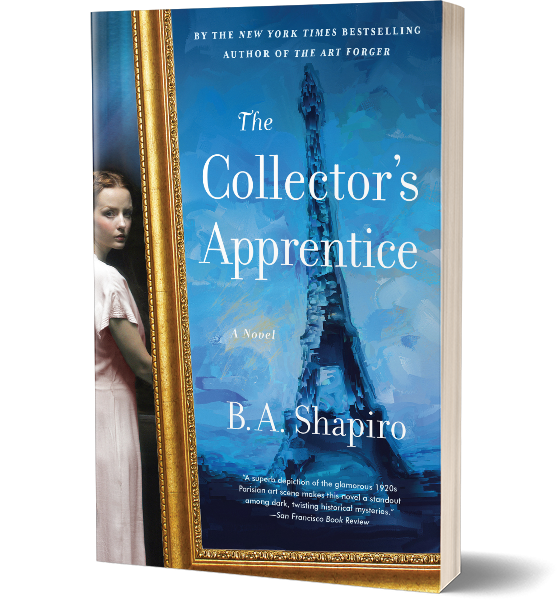 Shapiro takes readers to Paris in the 1920s and the ever-fascinating world of Gertrude Stein’s salon and the artists, such as Matisse and Picasso, with whom she surrounded herself. These and other real-life icons are deftly integrated into a gripping mystery involving love, intrigue, murder and, of course, art.

When she is accused of playing a role in a Ponzi scheme perpetrated by her erstwhile fiancé, Paulien Mertens seeks solace and sanctuary in Paris, where she creates a false identity as a Frenchwoman named Vivienne Gregsby. As Vivienne attempts to recover her father’s art collection—stolen along with all her family’s assets—and prove her innocence, the eccentric and wealthy American art collector Edwin Bradley offers her a job. She is soon immersed in the world of expatriates and post-Impressionist art, becoming Matisse’s lover, and traveling between Paris and Bradley’s native Philadelphia, where he is building an art museum. But her exciting new life is abruptly interrupted when Vivienne is arrested for Bradley’s murder.

“The Collector’s Apprentice is a work of fiction loosely inspired by the lives of the art collector Albert Barnes and his assistant, Violette de Mazia, as well as the history of the Barnes Foundation, which he founded and they both nurtured,” Shapiro writes in an author’s note. From this raw material, she has invented a tantalizing story that draws on extensive research into not only the lives of Barnes and de Mazia, but of the many historical characters in the book. The evolution, principles, artists, and works of the post-Impressionist movement that are central to the story are drawn with particular accuracy and appreciation. The result, like all of Shapiro’s much-loved work, is a seamless blend of art history set against a wider historical backdrop, and all wrapped in an impossible-to-put-down fictional narrative.

“Shapiro delivers a clever and complex tale of art fraud, theft, scandal, murder, and revenge. [Her] portrayal of the 1920s art scene in Paris and Philadelphia is vibrant, and is populated by figures like Alice B. Toklas and Thornton Wilder; readers will be swept away by this thoroughly rewarding novel.”
—Publishers Weekly
“Lush, atmospheric . . . Shapiro’s romantic and suspenseful art thriller will delight historical- and crime-fiction fans.”
—Booklist
“B.A. Shapiro delivers another dose of art history, wrapped tightly in a thriller.”
—New York Journal of Books
“Shapiro creates a complex, detailed, and historically-accurate world, and the lack of any straightforwardly heroic characters, along with a superb depiction of the glamorous 1920s Parisian art scene, makes this novel a standout among dark, twisting historical mysteries.”
—San Francisco Book Review

Paulien is aware that being banished to Paris with 200 francs in her pocket isn’t the worst of circumstances. But the city is vast and crowded and lonely despite all the noise and hubbub, not at all the way she remembers it. She wishes she were back in Brussels, filled with hope for the future, standing with her arms held wide as the seamstress made the final adjustments to her wedding gown. She looks down at the diamond on her ring finger. There is still hope. It’s a crazy mistake, which George will straighten out.

His telegram read: NOT AS IT SEEMS. STOP. GOING AFTER SWISS BANKER WHO STOLE ALL THE MONEY. STOP. WILL COME FOR YOU WHEN SUCCEED. STOP. LOVE ALWAYS.

It pours the day she takes a bateau along the Seine, and she’s unaffected by either the Eiffel Tower or her walk down the Champs-Élysées. Even a visit to the Louvre, a place of worship to her, leaves her as cold as the classical sculptures there. She worries about her parents and her brothers, wonders how they’re holding up, what they’re doing. She’s edgy and skittish, startles at every sound, searches every face for a sign of George or her father.

Clearly she needs something more absorbing than sightseeing. She decides she’ll look for a position in a gallery like the one she had in London after she graduated from college, gain a little more experience before she goes out on her own. George spoke about starting a new company. Why not here? It doesn’t matter to her if she opens her gallery in London or in Paris or in Brussels for that matter. She smiles as she imagines asking her father’s advice on which artists she should choose for her first show.

True, Papa and Maman were the ones who cast her out. He has destroyed everything we have been building for generations—and you brought him here, allowed him to do this to us, helped him! She can still hear her mother’s words. It is all gone. What we had, what you and your brothers and your children would have had. Everything that we are. Our name. Our proud name . . .

When I was a little girl, I wanted to be an artist. My parents were accommodating, buying me paints and canvases, setting up a “studio” for me in a corner of our basement, and enrolling me in art classes at the Wadsworth Atheneum in Hartford, Connecticut. Unfortunately, it became clear early on that this was not where my talents lay.

So I moved on to other things: the Beatles, the Flintstones, and reading every novel I could get my hands on. I read A Wrinkle in Time and decided I wanted to be Mrs. Whatsit, an extraterrestrial being who could bend time and space to her whim. When my mother gently explained that this wasn’t possible, I told her I wanted to write novels like Madeleine L’Engle. This, she assured me, was doable, but instead I became a sociologist.

1. One of the themes of the book is that we see only what we want to see, and that we’re easily swayed by outward appearances. Do you think this is true? How does Shapiro develop this theme throughout the novel? Have you had any experiences in which you were fooled by someone pretending to be someone or something they weren’t?

2. The majority of The Collector’s Apprentice takes place in the 1920s and is told from Vivienne’s point of view. However, there are also portions narrated by Paulien that take place before the main storyline, and portions narrated by an older Vivienne that take place after the main storyline. How did this structure affect your reading experience?