Praise
Excerpt
Trailer
Essay
Reader's Guide
Buy
Alizée painted at a makeshift desk, an overturned shipping crate with one side sawed off to accommodate her legs. According to the label, it once held uniforms for butchers; she hadn’t known butchers wore uniforms. She worked in a warehouse that jutted into the Hudson River where eight different mural projects were being created side-by-side, and armies of artists clutching charcoal or brushes or marble pestles bustled through the yawning space.

Two years ago, she’d returned to the States after seven years in France. Seven more than she would have chosen, but she’d learned early on that the vagaries of fate had far more power than she did. She was nineteen at the time and had been living for that moment, had done battle with her family, her friends, even her art teachers, to realize it.

Nevertheless, at the first sight of Lady Liberty, she was swamped by a wrenching sadness and that odd sense of floating above her own head. From afar, she watched the shadows darken the space around her as she stood on the ship’s deck, searching for people bustling with energy and opportunity, the ones she remembered and the ones she knew weren’t there anymore.

Obviously, the country was in the midst of a depression, and she’d thought she was prepared for this. But the mute shipyards bounded by weathered warehouses, their wide doors swung open to reveal their lack of wares, unsettled her. It was well into the morning of a working day, yet grimy men, newsboy hats cocked, sat on posts along empty piers, smoking cigarettes and watching the boat’s arrival with no interest whatsoever.

This was where the memories lived, and that would be difficult, but it was, she somehow knew, the only place her real life could begin. And she was right. Now, although the empty warehouses and grimy men were still perched on the New York City docks, she’d beaten back most of the sadness and moved on.

“Looks swell.” Lee leaned over her shoulder and squinted at the tiny, four-by-six inch canvas she was painting. “If you like wooden patriotism.”

“My favorite,” Alizée said dryly. Although she got a kick out of making fun of the stiff, overly enthusiastic style imposed by the WPA, she wasn’t about to complain about receiving a paycheck to produce art. Even if other artists actually designed the works she was painting, it was a hell of a good gig.

Lee squatted, looked more closely at the small panels. She’d taken over directing the mural from a boy who’d gone to fight Franco in the Spanish Civil War, receiving the unacknowledged and unpaid promotion because she’d worked for the WPA longer than any of the other assistants. She was ostensibly Alizée’s boss, although neither of them thought of it that way; they’d been friends long before this particular project. Lee frowned at the six, four-by-six-foot pastel studies Alizée was miniaturizing, the original WPA-approved drawings for the mural.

Alizée didn’t like the frown. “What?” she demanded in mock dismay and lit a cigarette. “Now you want to change it after I’ve worked my butt off for a week?”

It would take time to redo her efforts, but that was all it was: an effort. A job. Her own paintings were her real work. And those were very different from these: less tangible, more multidimensional, more in the process of becoming something else. When she worked on the mural, she was outside it; it was separate from her. With her own canvases, there was no space in between.

“Something queer about it.” Lee cocked her head to the side. She was far from beautiful, but there was a voluptuousness about her, both in body and temperament, that made men forget all about her plain face. Lee claimed she didn’t like going to parties with Alizée because, as she put it, “Alizée captures the room,” which was ridiculous. Lee garnered attention, particularly male attention, everywhere she went.

Alizée walked up to the original drawings, thought for a moment, then rubbed her palm vigorously along the left legs of three shipbuilders shouldering a large slab of wood until the original lines of the sketch were indistinct. Then she started refashioning their calves. “Better?”

Lee nodded and pointed to the men’s shirts. “A little more blue mixed in with the gray, I think.”

“Sure,” Lee said and sat back down at her desk, which was next to Alizée’s.

After work, they often went up to the West Village for a beer dosed with arguments about the future of art, the meaning of art, the political in art, the abstract in art, just about anything in or of art. It reminded Alizée of Café Dôme in Paris, but without all the depressed faces and gloomy war talk.

A Frenchman might complain that the artists who flowed in and out of the Shop in paint-splattered waves drank too much, debated too boorishly, laughed too loudly and didn’t look beyond the streets of New York for either their art or politics, but he would also be forced to admit that they knew how to have fun. To Alizée, it was as if each person at the Shop was years younger than his or her European counterpart.

She loved the levity, the lightness, but more than that, she reveled in the shared certainty that being able to make art was the most amazing gift anyone could receive. Granted, it was tough for everyone these days, particularly tough for artists, and particularly, particularly tough for female artists. But just last week, her usually critical teacher, Hans Hofmann, proclaimed that one of her paintings was so good he would never have believed it was painted by a girl. He’d meant it as the highest compliment, and she’d taken it as such.

She had the mural job, which was no little thing, and she was happy, proud, of that, although it was difficult to get the galleries to show anything painted by a girl, especially if the paintings were abstract. But if she was going to spend her days working representationally, she damn well wasn’t going to do the same on her own time just to please some pigheaded gallery owner. So she went to the Shop to drink and gripe with her like-minded comrades.

Lee leaned toward Alizée’s desk, her eyes shining wickedly. “Forgot to tell you Bill and Jack said they can’t make it to the Shop until a bit later, but Mark said he’d be there around five, so let’s leave here on the early side.”

Lee grinned. “He’s such a wonderful, sweet bear of a man.”

Alizée picked up a piece of pastel and bent over her work, shielding her face with her hair.

“Oh those soft, sensuous lips…” Lee whispered in her ear.

Alizée shook her off with an awkward laugh. She wasn’t about to discuss Mark. With Lee or with anyone else. There was nothing to discuss. Would never be.

She turned back to her mock-up: a miniature of the six-panel mural to be hung on the walls of a high-school dining hall in Washington, D.C. It felt like playing instead of working, although it was most definitely work. This warehouse and much more were part of President Roosevelt’s New Deal: the WPA, FAP, TARP, PWA, a whole alphabet of programs funded by the government in the hope of ending the Depression. Unfortunately, these programs had been going on for almost as long as Alizée had been in France, and still no one seemed to have any money.

Occasionally bureaucrats appeared at the warehouse and stood around looking decidedly ill at ease in their suits and bowler hats. The president’s wife came once, but she was completely at ease. Mrs. Franklin Roosevelt climbed up ladders, unconcerned that she might get paint on her dress. She stopped and talked with the artists, asking questions and listening intently to the answers. Even answers from the assistants. You’d never see Mme. Albert Lebrun or Mme. Léon Blum do anything like that.

Alizée didn’t much miss university in Paris or even the brief touch of success she’d had there, but she did miss her family. Often quite desperately: Oncle and Tante, who’d swooped in after her parents died and raised her as their own; Babette, who’d squeezed her hand and whispered, “I’m more than your cousin now, I’m your sister,” on the night she first arrived; her older brother, Henri; little Alain. All of them on the other side of the ocean.

But Henri would be coming to the States as soon he completed his exams, and Babette and her family, currently in Germany, talked of coming over, too. Alizée had given up a lot to return to America, but it was exactly where she wanted to be. She reminded herself of this when the sorrow and loneliness she kept coiled deep inside pressed beyond the margins she worked so hard to maintain.

In New York, she was free to paint in the style of the moderns, something she’d been yearning to do. To study at the feet of Hans Hofmann with no fear of the octopus reach of Adolf Hitler’s decrees against modern art, his desire to suppress anything that didn’t smack of militarism and obedience. Especially if it was nonfigurative. The impact of his 1937 exhibition titled Entartete Kunst – Degenerate Art – deriding Picasso, van Gogh, Matisse, Chagall and many others, was unfortunately being felt across Europe, even in Paris. In New York, she could lose herself to the newness of abstraction, the fever of it, drawn to its insubstantial yet substantial nature, its difficulty and the wonder of the intuitive connections. This was worth everything. 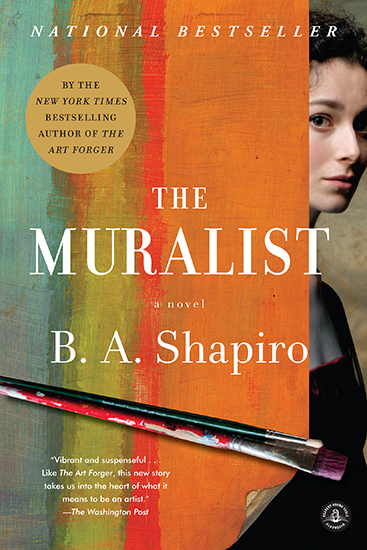 Return to The Muralist