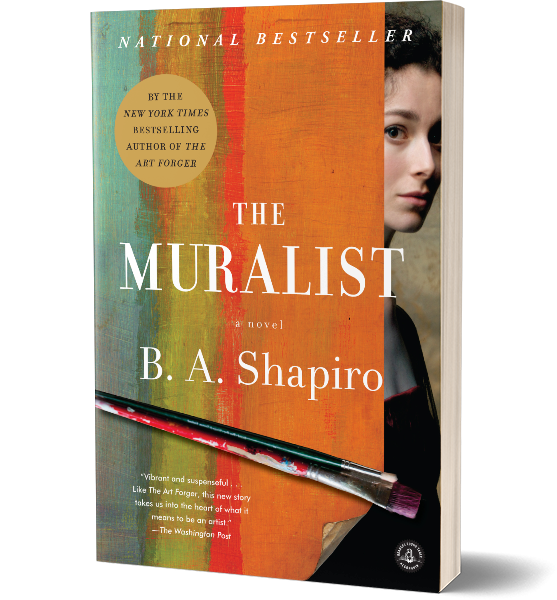 From the author of the New York Times bestseller The Art Forger comes a thrilling new novel of art, history, love, and politics that traces the life and mysterious disappearance of a brilliant young artist on the eve of World War II.

Alizée Benoit, an American painter working for the Works Progress Administration (WPA), vanishes in New York City in 1940 amid personal and political turmoil. No one knows what happened to her. Not her Jewish family living in German-occupied France. Not her artistic patron and political compatriot, Eleanor Roosevelt. Not her close-knit group of friends, including Mark Rothko, Jackson Pollock, and Lee Krasner. And, some seventy years later, not her great-niece, Danielle Abrams, who while working at Christie’s auction house uncovers enigmatic paintings hidden behind recently found works by those now famous Abstract Expressionist artists. Do they hold answers to the questions surrounding her missing aunt?

Entwining the lives of both historical and fictional characters, and moving between the past and the present, The Muralist plunges readers into the divisiveness of prewar politics and the largely forgotten plight of European refugees refused entrance to the United States. It captures both the inner workings of today’s New York art scene and the beginnings of the vibrant and quintessentially American school of Abstract Expressionism.

B.A. Shapiro is a master at telling a gripping story while exploring provocative themes. In Alizée and Danielle she has created two unforgettable women, artists both, who compel us to ask, What happens when luminous talent collides with inexorable historical forces? Does great art have the power to change the world? And to what lengths should a person go to thwart evil?

“B.A. Shapiro makes the radical, varied, and sometimes enigmatic world of abstract expressionism altogether human and accessible in her smart new historical thriller…. Shapiro also does a wonderful job of restoring complexity to the historical moment and stripping away the clarity of retrospection.”
—The Boston Globe

“B.A. Shapiro captivated us in 2012 with her “addictive” novel The Art Forger. Now, she’s back with another thrilling tale from the art world, set right on the brink of World War II.”
—Entertainment Weekly

“Shapiro follows the enthusiastically received The Art Forger with an even more polished and resonant tale. [Her] novel of epic moral failings is riveting, gracefully romantic, and sharply revelatory; it is also tragic in its timeliness as the world faces new refugee crises.”
—Booklist (starred review)

“In this noirish intrigue and fine-art detective story, Shapiro ably intersects the early years of the abstract expressionist movement, the Roosevelts, institutionalized anti-Semitism that denied American visas to Jewish refugees, the relentless run-up to World War II, and the generational losses of the Shoah. Mystery and historical fiction lovers…will find this a riveting read.”
—Library Journal (starred review)

Alizée painted at a makeshift desk, an overturned shipping crate with one side sawed off to accommodate her legs. According to the label, it once held uniforms for butchers; she hadn’t known butchers wore uniforms. She worked in a warehouse that jutted into the Hudson River where eight different mural projects were being created side-by-side, and armies of artists clutching charcoal or brushes or marble pestles bustled through the yawning space.

Two years ago, she’d returned to the States after seven years in France. Seven more than she would have chosen, but she’d learned early on that the vagaries of fate had far more power than she did. She was nineteen at the time and had been living for that moment, had done battle with her family, her friends, even her art teachers, to realize it.

Nevertheless, at the first sight of Lady Liberty, she was swamped by a wrenching sadness and that odd sense of floating above her own head. From afar, she watched the shadows darken the space around her as she stood on the ship’s deck, searching for people bustling with energy and opportunity, the ones she remembered and the ones she knew weren’t there anymore.

Obviously, the country was in the midst of a depression, and she’d thought she was prepared for this. But the mute shipyards bounded by weathered warehouses, their wide doors swung open to reveal their lack of wares, unsettled her. It was well into the morning of a working day, yet grimy men, newsboy hats cocked, sat on posts along empty piers, smoking cigarettes and watching the boat’s arrival with no interest whatsoever.

This was where the memories lived, and that would be difficult, but it was, she somehow knew, the only place her real life could begin. And she was right. Now, although the empty warehouses and grimy men were still perched on the New York City docks, she’d beaten back most of the sadness and moved on.

Excel spreadsheets. Bar graphs. Bubble maps. Pie charts. Scattergrams. Intersecting and overlapping normal curves. Not the usual items in a novelist’s toolkit. But my tools nonetheless. Granted, I have a math background—one of my areas of specialization in graduate school was statistics—and everyone knows that being able to invert a matrix is a prerequisite for a successful literary career. Or not.

But I’m forced to fall back on these skills because I suffer from a serious deficiency in the novel-writing department. Some novelists tell tales of being seated at a computer, writing drivel and getting nowhere, when suddenly the characters take charge and march the story in a completely new direction that the author is helpless to stop—but thrilled to go along with.

1. The Muralist exposes many facts about the situation in the United States before World War II, including the denial of visas to qualified refugees, the majority of the country’s opposition to entering the war, and the open discrimination against Jews. Did you find any of this surprising? In the wake of the Allies’ victory, how has history generally portrayed this prewar period in America? Do you think there are parallels to the United States in the twenty-first century?

2. The issue of refugees running from war and oppression is as current today as it was during World War II. What similarities and differences to do you see between nations’ responses today and those before World War II? What about in attitudes among U.S. citizens?